In 1991, Von Trier’s masterpiece Breaking the Waves is awarded the Golden Palm at Cannes. Lars decides to summon all his strength and try to get to the festival for the closing ceremony. He discards the idea of taking an airplane because he is terrified of flying; rushes out of a car horror-struck by the prospect of slow traffic and traffic jams; and eventually, decides upon taking a train. When he gets to the station, though, he finds out that his coach is sealed and the windows cannot be opened from the inside. He absolutely cannot travel in those conditions. He overcomes a panic attack, then watches the train (which does not satisfy all his needs) as it leaves the station heading to Paris. Without him. After this umpteenth failure in the attempt of defeating his plethora of obsessions and phobias, Lars consents to being hypnotized by Mesmer, a hypnotist who by chance has the same name of a character from one of his movies. His goal is to get to Cannes relying on the therapeutic effects of hypnosis. Mesmer is a bizarre hypnotist as much in appearance as in the methods he uses with his patient. He takes Lars on a journey inside his mind, where he is met by a landscape with the cold colors of a northern fable; he makes him regress to his infancy, dominated by a nudist mother – the director’s mother – who remarkably resembles the Snow Queen, the character from the eponymous tale by Hans Christian Andersen (whose picture Von Trier keeps in his living room, only for the pleasure of insulting him every morning at breakfast); he conjures up the director’s encounter with cinematography, and the ghosts of his obsessions – one for all, his unconditional love for film-maker Carl Dryer – and materializes his recurrent fears, such as the fear of lacking control over his actors and of not being loved by them. In the process ,Mesmer imposes on Lars quite embarrassing methods, at times, as playing the lead character in a grotesque session of psychodrama. The relationship between Mesmer and Lars is in all respects a trial of strength. At stake is the loss of control on things, people, events, and even one’s past. When Lars gets out of it, he feels overwhelmed, defenseless, and he seems, for once, to have lowered his guard and gained an ironic distance from his life’s events and from the image that he has built of himself. But when he gets a clue that even Mesmer, the hypnotist himself, could be one of the fictional characters inside his mind, Lars feels the impulse to regain control of the game. With unfortunate consequences. What remains of this work (three years of research) is a experimental short film, that you can see for free in the link next to this text. 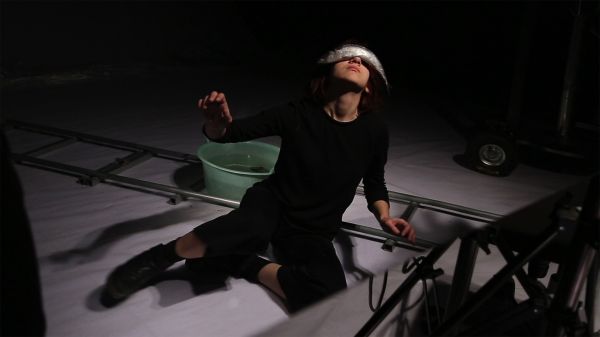