Milva's Last Krapp is a physical theatre performance, a dialogue between two bodies balancing between control and loss of control.

The idea of the project rose from a private experience of one of the two performers, Marta. After a road accident, her body started to show convulsive movements, traces of memories buried into the body. It is noteworthy of these convulsions that they can be self-induced and that they do not cause any pain in the performer. On the contrary, they have a liberating effect on her body and mind.

During the totality of the performance Marta's aspect is hidden by tall and narrow paper curtain and her presence is revealed only by the sound of her movements against the floor and the paper. The rhythm of these movements determines the energetic temperature of the whole performance. The rhythm given by Marta then creates a dialogue with the sound stimuli given by the other performer, Piero. Dancing on the edge of the loss of control on his body and identity, Piero will narrate Marta's story, or at least a possible one.

Few essential signs articulate the dramaturgy: a pair of ice-sandals, some strangled notes of an old dusty love song, Surabaya Johnny, and a red light, which progressively mutates its tonality and eventually finds a new uniformity in chromatic disorder.

The fusion of these elements gave birth to Milva's last tape: a collapsed ballad for broken bodies. 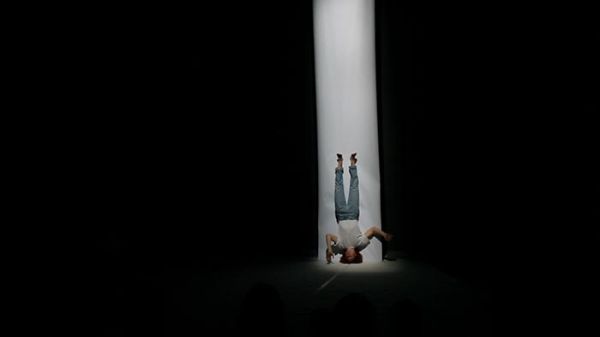