You Fight! is a performance about wired entertainment forms in the live streaming era, the marketing's gamification on the online platforms, and how those technologies modify common notions of presence and reality. Our work focus on body in this new environment, a body standing in conflict between the virtual encounter and the space of human relations. The virtual space is becoming a playground for amateur, actors and voyeurs. It’s a role game structure, for money indeed. We imagined a world where this home streaming-entertainment is grown, and everybody is working in a constant streaming of data, selling their representation as in a permanent game structure: working and fighting to reach more audience, more consensus. In this context, the creation of virtual identities that are producing work and income is the first step in a living process of a “gamification of reality”. We imagined a radical gamefication, where everybody lives inside a game that allows you to build virtual identities and work online, a platform-capitalist system based on the live transmission of audio visual data. The platform helps interacting with virtual audience reaching consensus and economic sources. Every player has a debt to pay off to the platform of the game, because while playing it's betting on the success of his performance to reach revenue and profit.

“You Fight!” is the name of this home-streaming gaming platform. Two women are challenging each other in a chess- boxing match, a sport created by the cartoonist Enki Bilal in the end of the ’90s, in which players alternate a round of boxing and a round of chess. This chess-boxing is their show inside this live streaming platform.
Little by little we discover a world were you have to create home-amateur shows to make money, digital coins called Energy Coin, received in relation to the amount of follower’s Likes. The followers are the third character of the performance, endless influencing the development of the game. The two girls, constantly in competition, have to achieve a certain amount of Energy Coins in order to unlock their “freedom time”, another virtual space where they can spend the money earned to buy other entertainment. However problems arise when they start to miss their audience, and Deep Blue starts to lose Energy Coin through a lack of followers. How to reconquer your audience to survive? This conflict incites something new in the relation between the two girls, the beginning of a real encounter, an exchanging of gaze and human feelings that had seemed buried for so long. Can we escape from the tasks of selling our representation to survive? Meanwhile we're asking ourself those questions, Narcissus is still loving himself falling inside his brand-new black mirror...

The practice of technologies is the central axis of the play, from which the dramaturgy was developed. The use of motion capture systems on stage allows to connect the sound to the performers movement. The key-elements are the gesture, the body position in the space, the internal physiological states. The goal of all these codified elements is to create a virtual body and a virtual habitat with a precise sound identity. The absence of the spoken word elevates the sound as the main narrative and aesthetic matter. The musical research is articulated around three main narrative needs. At the beginning the sound is the Echo of the movement, as a diegetic sign able to give an intelligible impact in the relation between gesture and sound. During the work, however the sound assumes a more functional expression: the sound interaction is mobilized to keep the space of the absence of the words, therefore is a surreal spread of the emotional and psychological tensions of the characters. In the strictly musical parts the syntax is decoded by the motoric memory of the performers, and is composed as an open score, the single elements within being organized in a more de ned sound form. In this case the diegetic gestures leave the theatrical conventions to create a fusion with the sound habitat on stage. The concert-form appears as the very height of a learning process of the creative relations between space, movement and sound information. The visual apparatus works in deep synergy with the other elements presented before. Video has a narrative function as an interface and output of the game “You Fight” and contributes to creating the “magic box” where the performer’s acts providing visual feedbacks on sensors used by the performers themselves. The projection designs the space of the game through lines, shapes, colors, words and other visual elements attempting to create a possible future user interface available for users all over the living space. Besides the biggest interaction between performers and screens is the live view provided by two smartphones used by the performers as cameras with which they lm each other for their followers creating their narrations trough the show. These elements are not just set-design elements, but signs providing meaning both for the audience and actors and changing the shapes of the space-habitat and the narrative events, thereby changing the performers relations. 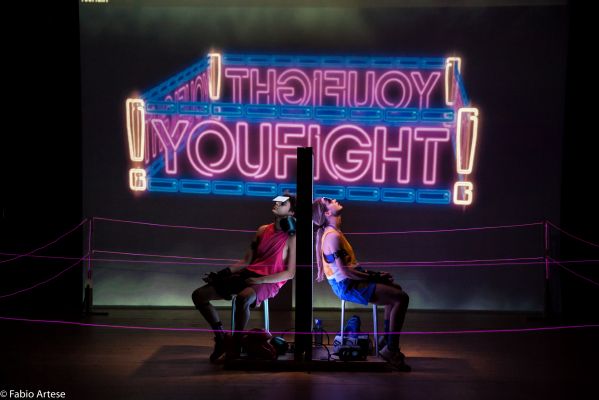