Wild Words is a feature documentary directed by Ana Shametaj, produced by Ubulibri and RaiCinema, about the creation's process of the show "Oaths" by Teatro Valdoca. Teatro Valdoca is an historical italian theatre company, formation hub for many members of the Kokoschka Revival collective. Kokoschka's directly involved in this production are Damon Arabsolgar, Anselmo Luisi, Piero Ramella, Ana Shametaj and Ondina Quadri; many others supported it contributing with their point of view.

A group of 12 young actors spend 3 months studying, rehearsing, and living together in a theater on the high hills of Romagna. Four artistic masters guide them along a path made of physical trainings into woods, choirs and polyphonic singings; silence, attention, memory exercises, and philosophical studies - according to ancient masters' methods. Every day the poet Mariangela Gualtieri writes poetry drawing inspiration from the girls and guys themselves, fitting the verses to their personalities. The group of actors is trained by the director Cesare Ronconi to become a chorus, a unique body compact on stage. At the same time every actor is pushed to fathom their own solitude. The winter wood around the theater becomes the place were they look for a genuine voice to declaim the lines, the labyrinth to face where everyone looses themselves and finds what they were looking for. It is the portrait of a community that takes shape into poems, the language that gives voice to the need of combative, clarifying, exhortative and common words. Through those words they start an epic endeavor of resistance, into the obligatory attempt - for who has 20 years old- of refounding of life and arts.

The core of the documentary is the attempt to describe the poetry process along its creative journey. Mariangela Gualtieri gives the actors words that are precise, dense, concentrated and simple: it is the newborn poetry line, written and shaped specifically for them. Cesare Ronconi besides directing is also a cooker and a diviner: he liberates every single actor from their fears and egocentricity and trains them to be a group, caring for each other, from cooking to philosophy. Every actor finds themselves drawn into a strange position, very alone and very into group. The storytelling of the film changes as every actor falls inside this inner and intimate research, a poetic initiation that began from losing himself into the wood. “Gli Indocili” is the story of an alchemy, that has the traits of the adventure: the alchemy of being indocile, of being resistant. Lucidity and sensibility, this is the meaning of indocile: facing a general feeling of powerless with sharp words and a right attitude . To return to your own body, to the care of yourself and of the others, to the un- productivity and generosity is the right way to produce an act of resistance and have the courage to be tender, ingenuous, and deeply aware at the same time. To take a point of view that becomes a point of life, a cognitive awareness that could trigger a collective action unrepeatable and unforgettable, like staying together and living the absurd belief of being allowed to scream: "with a kiss I can overturn an empire". 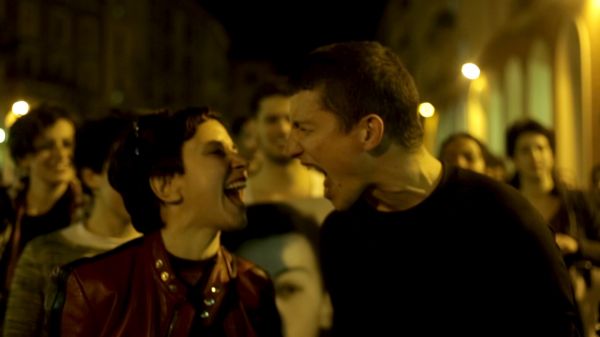